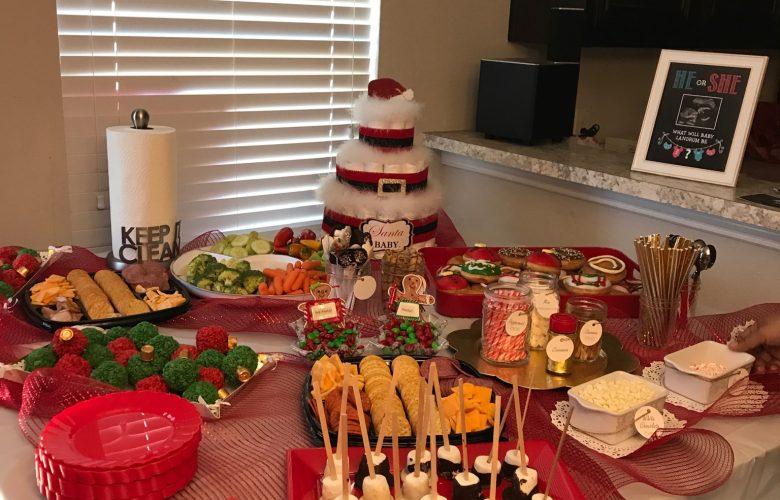 I can’t believe it’s been a year since my son Gabriel and daughter-in-law Barbara had their baby reveal party.

Barbara decided on a Santa Baby theme so we put on our creative caps and started planning. My sweet neighbor Angela volunteered to help so the three of us got to work!

It was such a cold winter day but that didn’t keep guests from coming to the party. We had the usual…veggie platter, fruit platter, meat and cheese platter, but then we added some fun! Green and red Rice Krispy treat ornaments, s’mores on sticks, Christmas Krispy Kreme donuts and a fabulous hot chocolate bar!

Of course we had to have a diaper cake, trimmed with red velvet ribbon, white furry boas, and gold glitter!

And a voting station for boy or girl!

After eating all that sugar and visiting with each other, it was time for the big reveal.

Barbara decided that the family would smash eggs on their foreheads and the one that wasn’t hard boiled would tell us what the gender was. The eggs were all dyed pink and blue. So my son, Barbara and their three kids, Alex and Julius and Clara each picked a pink or blue egg and proceeded to smash away.

Poor Clara! The raw pink egg was all over her! I asked her why she didn’t smash it on her forehead instead of the top of her head. She said she was afraid it would hurt lol!

What a fun, exciting day it was. This Christmas, we can hold and love on our little Josephine. She was named after my mom who passed away several years ago. Such a beautiful tribute to her.

I might technically be an Empty Nester but my nest continues to expand with more special additions to the family.