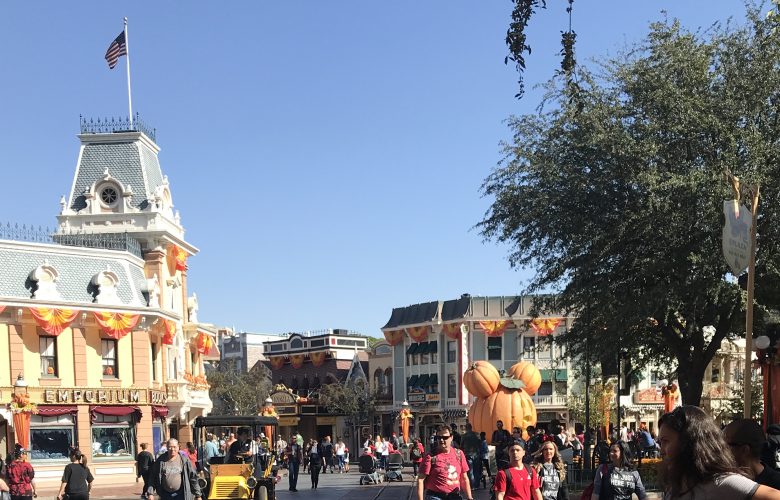 Being an Empty Nester doesn’t mean your nest is always empty! Go spend the day with nieces, nephews or cousins and have fun!

Recently my 20-year old God-daughter invited me to Disneyland when I was visiting California. Although I travel to Los Angeles every month to visit my dad, I never do touristy things when I’m there. I was so excited to go with her.

It was nice because it was during the week so the crowd was minimal. We arrived at 10:00am and the lines were short. Madi, my God-daughter loves to sketch Disney characters and have the characters at Disneyland sign them. She has a season pass so of course she was going to be my personal guide!

First, I had to find her at the front gate. It wasn’t too hard with the light attendance.

Then on to Main Street! I’ve been here since I was a little girl and nothing ever really changes on Main Street. I love that they do seasonal decorating, we went at Halloween time, but they have preserved the original feel of Main Street throughout the years. Also this is the only time of year when all visitors can come in costumes. As if there wasn’t enough to see at Disneyland, now add total people watching to that.

The magic store is where my brother and I always bought our souvenirs from.

One change was the Starbucks added to Main Street! Also the array of Minnie Mouse Ears was amazing!

Our first ride was none other then the Haunted Mansion! Pretty appropriate for Halloween season, and they didn’t disappoint in the decorating.

Next stop was Pirates of the Caribbean. Another ride that has remained the same over the years. They have made some “politically correct” changes, but they were appropriate. Instead of auctioning women now townspeople are auctioning household items, instead of men chasing scantily dressed women now the women are carrying platters of food lol!!

Time for a Churro cheers break and refill my water bottle at the purified water stations.

Next we visited the new Star Wars area. I’m sorry to say I don’t know a whole lot about it, but my husband does so I took as many pictures as I could for him. I have to say the ride was very interactive and fun. It’s a lot like Star Tours but instead of just watching the ride we all had jobs to do during the ride.

They randomly draw what job you do and lucky we were picked to be the pilots! I’m sure the other 4 people on the ride with us thought they could fly better than we did and they were probably right. Yet we had fun while we crashed numerous times!!

Lunch!!! All that walking, we worked up an appetite. We ate at Beary Cafe where we rested and watched the Pirate ship goes by.

And taking some selfies.

Next we met up with my cousin and other God-Daughter (Madis Mom and Sister). More selfies!

The amazing thing my cousin and I realized is, even though we were always together growing up, we have never been to Disneyland together. It made the day that much more special!

We headed to the Jungle Cruise but it was closed so we went to California Adventure. We went on a couple of small fun rides.

Who wants to be a butterfly?? We do!

We planned to have dinner there but that side of the park was closing for a special Halloween event, so we walked over to Downtown Disney.

We found an awesome quick, inexpensive gem, Taqueria! Tortilla Joe’s Taqueria is a great alternative to a sit down restaurant. The food was amazing and so were the prices.

We saved so much on dinner we walked across the way to Ralph Brennan’s Jazz Kitchen Express and ordered some beignets (French style donuts topped with powdered sugar) yum!

We went back into Disneyland and headed to It’s A Small World, but it was closed, as well as, the Matterhorn. Although I was a little disappointed, the feeling doesn’t last long in this Magical place. The castle was beautiful all lit up at night. Of course seeing Snow White and the 7 dwarfs and the wishing well makes everything all better!

Now to the closing ride of the night. None other than Autopia in Tomorrow Land! Not the old jalopies anymore!!

What a wonderful day surrounded by people I love! Maybe an empty nest, but never an empty life!!